If you are interested in buying or selling an artwork by Adolfo Riestra, please send us an email to [email protected] or give us a call to +1 210-305-6528 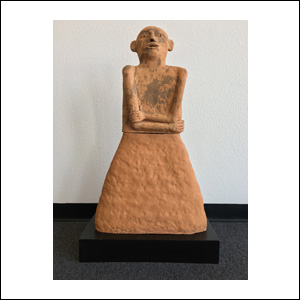 Adolfo Riestra was born in Tepic, Nayarit in 1944. His first approach to art was at eleven years old in the workshop of Dwite Albisson in Guadalajara. From 1962 to 1966 he studied law at the University of Guanajuato and at the same time painting in the workshop of Jesus Gallardo. He worked as a lawyer for several years, however his true passion was in art. Towards the end of the sixties he emigrated to San Francisco, California and New York where he remained for a long time. The drawing was very important for him, both in the development of his works and for his sculptures. He collaborated in Potrero Hill Graphics Workshop in San Francisco and made graphic work at the Kyron Workshop in Mexico City.

In 1982 he began to make sculptures, in Metepec he learned to make pottery in the manner of pre-Columbian artisans. Riestra had a deep interest in pre-Columbian forms and built his proposal from them. He was one of the few Mexican artists whose work has been recognized for working the clay as a means of expression. Riestra did not seek to emulate the art of a certain pre-Hispanic area, rather it was a mixture of certain characteristics of ancient ceramics that incorporated his sculpture.

His monumental totemic figures marked a milestone in the sculptural production of the last decades of the twentieth century for its originality, its technical perfection and its high power of poetic evocation. Figures that achieve the complex synthesis of the ancestral forms of the pre-Columbian past and the searches for appropriation, transgression and deconstruction of the postmodern era.

Adolfo Riestra was an artist who lived and worked intensely and passionately, his death occurred prematurely at 45 years of age, when he was at the height of his artistic career. Interestingly, he died the day after an important individual exhibition at the OMR Gallery, where an extensive selection of his sculptures was shown and provoked a general ovation among art professionals and the public.

His work is in important collections such as the Museum of Contemporary Art of Monterrey (MARCO) in Mexico, the Metropolitan Museum of Art in New York and the Lehmbruck Museum in Duisburg, Germany.

In the words of Erika Billeter: ”Adolfo Riestra endorsed a tradition and updated it. In his simplicity and elementary strength, his figures are understood by the man of today. The timelessness that characterizes the sculptures gives them the aura of the sacred. It has something of everyday life, and at the same time it would be said that they are able to join their ancestors of ancient culture without problems.”