If you are interested in buying or selling an artwork by Alberto Gironella, please send us an email to [email protected] or give us a call to +1 210-305-6528 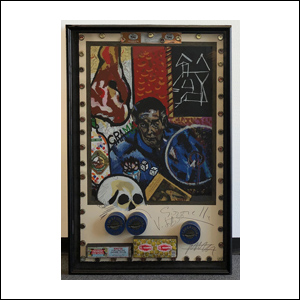 Alberto Gironella was born in Mexico City in 1929. He was the son of a Catalan immigrant father and a indigenous mother of Merida, Yucatan. He studied Spanish Literature in the Nacional University of Mexico and started painting at a young age, presenting his first solo show in 1952 at Galeria Prisse, which he founded with fellow artists Vlady Kibalchich Rusakov and Hector Xavier, after starting two literary magazines: Claviñero and Segrel.

On that year he created his first painting based on an art work from the past La condesa de Uta, starting what would become a long and extensive oeuvre, in which using both traditional and innovative media, he expressed his passion for Spanish literature and Spanish painters Velazquez and Goya; for Mexican icons such as Zapata, and international pop ones such as Madonna; for Nietzsche’s philosophy, Juan Rulfo’s Pedro Paramo and Lowry’s Under the Volcano. He was a friend of Andre Breton, Octavio Paz and Luis Buñuel, to whom he dedicated many works, made a number portraits and with whom he had a long and fruitful relationship, as well as with Chilean theatre and film director Alejandro Jodorowsky, Belgian artist Pierre Alechinsky, matador Manolo Martínez and photographer Hector García.

He was a supporter and advocate of more liberal political views, Gironella's impressions of the Mexican Muralism movement led him to believe that art should not be political, rather, it should be representative of one's subconscious mind. By rejecting the politically influenced artistic styles, Gironella found himself captivated by the avant-garde art movement surrealism. Gironella is said to contribute this fascination for colorful avant-garde style to deeply rooted memories in his childhood. Recounting that some of his earliest memories being of himself assembling altars with wrappers of chocolates, vibrant tins, and bottles from the family owned grocery store.

Alberto Gironella died in Mexico City in 1999 because of cancer.